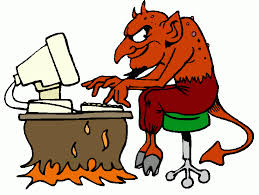 (Inspired by an article by Claire Cane Miller.)

I do not find technology is stressing me at all.

My email is enchanting and I tweet without a care;

I wouldn’t trade my tablet for an hour with Voltaire.

Those nervous Nellies who complain the Internet invades

All their waking moments are just playing at charades.

Our digital dominion is a blessing, not a curse,

And that is why I’m sending out this sportive little verse.

And is proof against the most overt misanthropy.

I wish I could convince all of you worriers and skeptics

The Internet is wonderful (when taking neuroleptics.)

The internet was bound to throw a Goebbels in our face;

Someone who has overcome their ties to truth and grace.

Taking all their bile and whipping up a clamor great,

He (or she) is floating on a sea of boiling hate.

I do not wish to name one person to this fetid role;

They may have a mother, or the remnants of a soul.

Perhaps they will repent of all the mischief they have done.

Or, perhaps more probably, this person I’ll not name

Will find that others just as shabby batten on that fame.

They’ll use that person to expand their own nefarious schemes,

And drag that person down to hell with help from sordid dreams.

This post is most assuredly NOT brought to you by Wells Fargo.  But if it was, they’d want you to know that they have a great deal of business expertise, that is at your service for a modest fee. 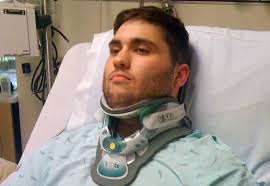 My posture is decaying and my neck is always sore,

And I wonder if my cell phone is somehow right at the core.

I do a lot of texting, even when I’m walking round

And once I even fell into a hole right in the ground.

With devices that could harm the noble human race.

So I tilt my head a lot when I am on the phone;

Surely it is not as heavy as some quarry stone?

I will try some exercise to straighten up my spine,

Like maybe flexing neck muscles or walking a straight line.

And if that doesn’t do the trick I know for sure what will;cell

To learn more about the maniac who wrote this, please click HERE.

The outlook wasn’t brilliant for the Optics team that day.

The Call of Duty Xbox game was getting hard to play.

The team was wishing that instead they could grab 40 winks.

But then from out the pizza boxes strode a lanky youth,

Whose brow, though slightly pimpled, shone with cybernetic truth.

And completed all objectives while he dazzled all his fans.

“Wallbong!” cried grim Nadeshot, as he led his team ahead,

But a Japanese contingent gave them something soon to dread.

“They ain’t got style!” said Nadeshot, as he played at fever pitch,

While millions watched him slug it out on something they call Twitch.

A grunge band is a-playing, and the peeps are on iPad.

And somewhere men are phishing, and the children grow quite stout;

But there is no joy for Optic Team – mighty Nadeshot has struck out!

Once again the government reports a data breach;

The hackers have invaded and are landing on the beach.

Leaving all the bureaucrats defenseless and distracted.

Whether they are Russian or Chinese – who gives a damn?

They have found an easy target, probing Uncle Sam.

That’s the thanks we get for bringing forth the Internet;

Those foreign hackers use it as a plaything or a threat.

That appeared suspicious and then roast ‘em nice and brown.

They’d feel it from their pinheads down into their scabby heel!

More missionaries of The Church of Jesus Christ of Latter-day Saints will be using digital devices as they preach the gospel in the United States, Canada, Japan and western Europe. TheFirst Presidency and the Quorum of the Twelve Apostles are expanding the use of mobile devices following a successful pilot program that has been in place since last fall involving 6,500 missionaries in 30 missions in the United States and Japan. Missionaries are equipped with specially configured iPad minis for studying and teaching the gospel.

Church leaders will also implement online proselyting in the United States, Canada, Japan and western Europe following a test in those areas for more than a year. Sister missionaries in some of the Church’s visitors’ centers are also using digital devices and online proselytizing as part of their daily activities.Thousands of missionaries in 35 missions used either a mobile device or existing computers in Church buildings, public libraries or other approved locations to use social media such as Facebook. An emphasis will still be placed on their assigned areas.

By early 2015, the Church expects that more than 32,000 missionaries in more than 162 missions will be using mobile devices. The expansion will begin later this year. The missionaries will be asked to buy their pre-configured iPad minis, which they can keep after their missions, much like they purchase and use their own bicycles. Those who can’t afford the $400 devices will be offered assistance.

“It has been a wonderful experience,” said Elder David F. Evans, a member of the First Quorum of the Seventy and executive director of the Church’s Missionary Department. “We’ve learned that they’re very effective tools for planning, for communicating with local leaders, for communicating with their mission president, and for keeping in contact with the investigators that are currently being taught [and] former investigators that they may have taught, either in the same area or some earlier place.”

“And we know in many parts of the world, the traditional forms of proselyting work very, very well,” said Elder Evans. “In some other places where technology and urban life has developed in such a way that missionaries have a harder time contacting people, we hope that these tools become even more valuable in those places.”

Church leaders envision that mobile devices will eventually enable missionaries to begin their formal preparation for missionary service before they enter the missionary training centers (MTCs), and then continue to use them for language and gospel study and to improve their ability to teach the gospel when they enter the mission field. “And then because of the ability to learn beforehand and to learn after the MTC, we anticipate that the MTC experiences will remain shorter as they are now as compared to earlier times,” Elder Evans said.

Missionaries are also learning how to develop positive lifelong digital habits. “We know that even with filters and every other safeguard that we can provide that the only really effective filter for lifelong technology use is the individual heart and mind of the individual young person,” stressed Elder Evans.